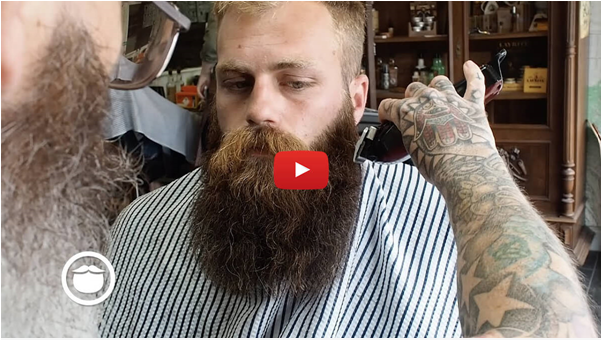 It’s a quite the decision to trim your big beard when you have no plans to make drastic changes in length. One thing we’ve learned along the way is that trimming the stray beard hairs can make a huge difference in the way your beard looks as a whole. Regular upkeep will have your beard looking thicker and more maintained. See for yourself via this new video; filmed on location at Gentleman & Rogue’s Club.

James came to see Gentleman & Rogues Club and get his beard trimmed. Key word trim there, he doesn’t want to take out much of the length even though the bottom bits are a little transparent. Darren is tidying it up by taking some of the weight in sides, clean up the mustache and growth line, then end with the little hairs on the neck. He starts combing it out to the sides to see how it falls naturally. It’s an important step so you don’t end up with dips in the density. Darren uses his forehand and backhand to stay in the same place to see it the same way the entire time. He skims the edges of the beard using the corner of the trimmers to give it an even look. The weight could be brought in more, but James wants to have more control.

There’s a little debate as to how far up Darren should trim since the edges are a slightly transparent. After some back and forth, James tells Darren to cut it where he thinks it’ll look best. So he trims off the transparent area. Darren free hands the beard trim, curving his hand around the edges. James usually have a square beard, but a rounded trim makes it look thicker and healthier.

They want to keep the length of the mustache, but just add some interest in the same. Darren cuts a triangle in the middle to make it easier for him to trim at home, and move out of the way when he wants to eat and drink. When it comes to styling it, just push in the product when it is dry. This’ll allow it to get its shape much better than if you brush it all out first.

When trimming your edges, it’s much better to work with a clear gel rather than a foam which allows you to see what you’re doing. Then, with your cut throat razor or what ever razor you use, don’t push too hard cause you don’t want to cut the skin.

Now that the cut is done, you’ll want to finish off with some products. Beard Oil is best used when your beard is still wet. But if your beard is dry, you’ll want to use the Utility Balm. A little goes a long way, so just work it into your beard and you’re good to go. You can also use the extra balm in your hair to prevent it from frizzing too!